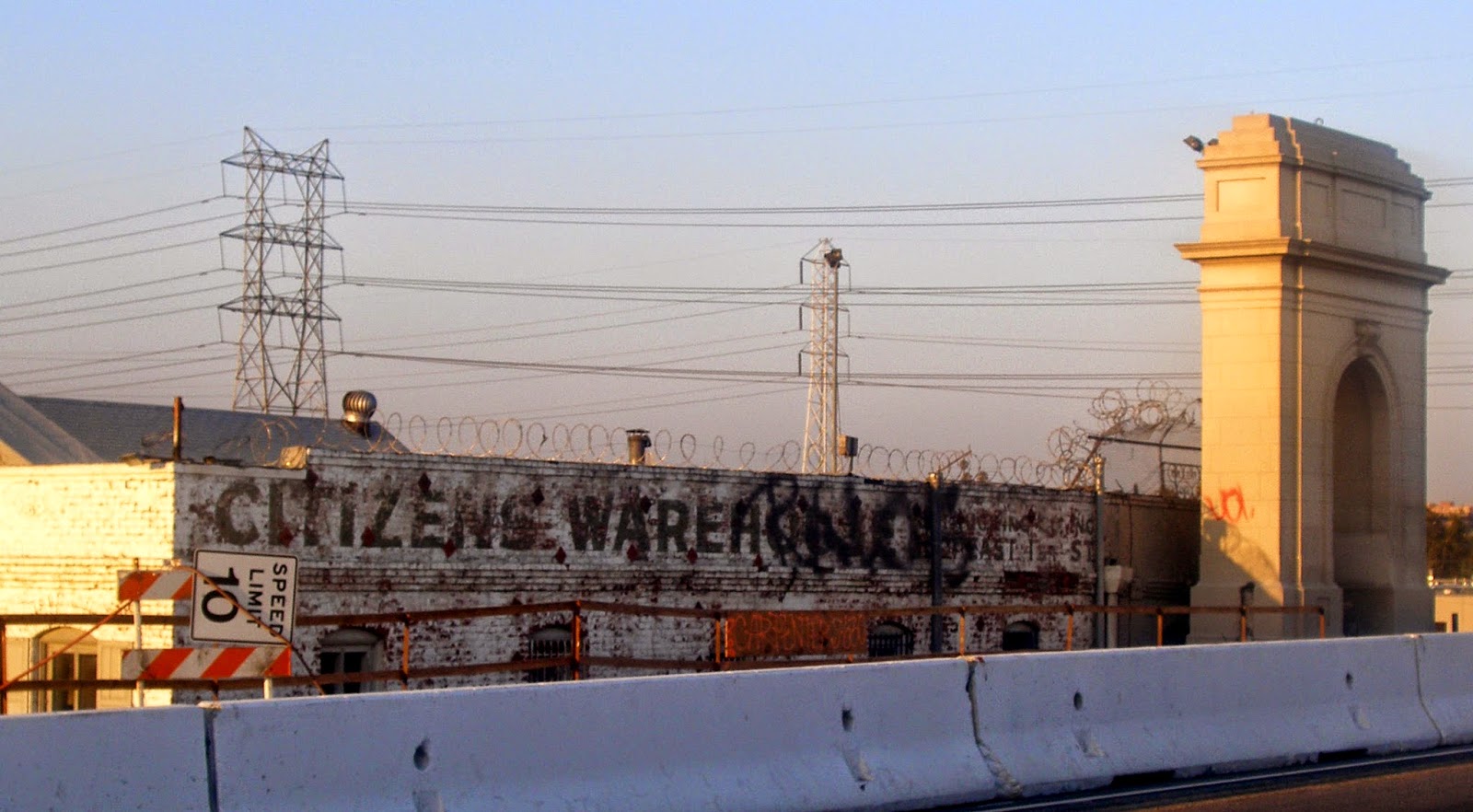 I first noticed the Citizens Warehouse Building as I crossed the First Street Viaduct while it was being widened to accommodate the metro rail Gold Line tracks.  That was in 2007.  I took a picture of this sign 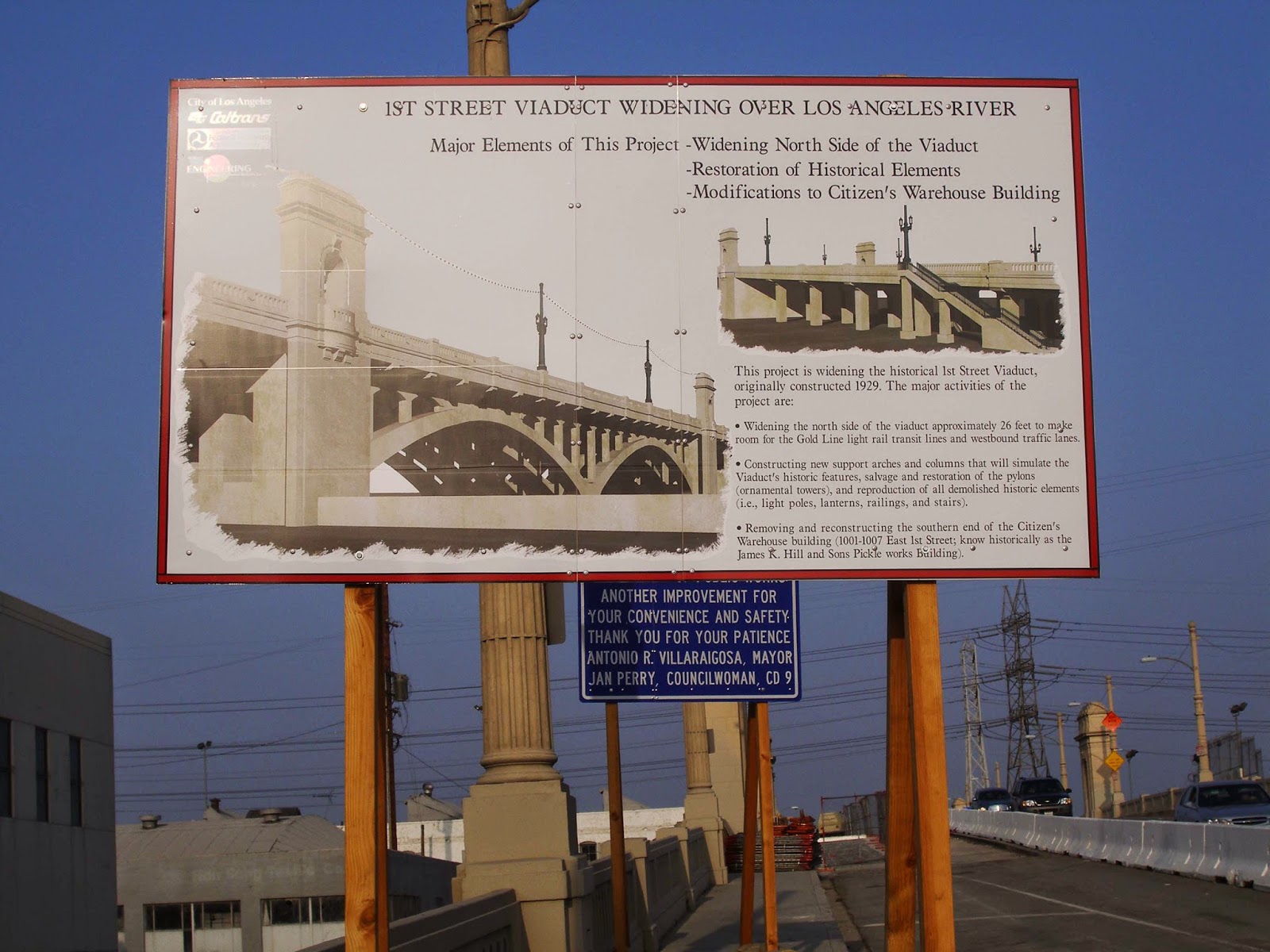 I didn't know anything about the building, but I assumed its future was secure, in a truncated form.  The end closest to the bridge would be made shorter, but the wall would be replaced where the building had been cut, I thought.  Isn't that what they meant by "removing and reconstructing the southern end of the Citizens Warehouse Building?"

The building had been declared eligible for listing in the National Register of Historic Places in 2005, while plans for the Gold Line were being developed.   This made the City of Los Angeles responsible to avoid, minimize or mitigate the adverse effects of the new construction.  It had been built in 1888 as a pickle factory, and is also known today as the Pickle Works Building.  Later it had served as storage for the possessions of those immigrants to California who were able to hire entire rail cars for transporting their household possessions.  After the nearby railroad station was destroyed in the 1933 Long Beach earthquake, it was used for the storage of soy sauce because it is close to both Little Tokyo and Chinatown.

It was and is an important site in the downtown arts district.  In 1980, artists began to move in.  The space was divided up and the artists created live-in studios according to their individual desires. Living in places like this was not legal, and they often ran into trouble with building inspectors.  Here's what Carlton Davis wrote about those days.

From 1981-1986, the building housed "The Art Dock" the world's first drive-through art gallery. Carlton Davis was hanging out on the loading dock one afternoon. A car stopped in front of them, and the occupants stared at them intently. A drive-by art gallery seemed like a good idea. Davis curated 40 installations by 35 different artists there over the years.

When I photographed this pigeon on a window sill in 2007, it looked like people were still living there, but they had to move out not long after that. 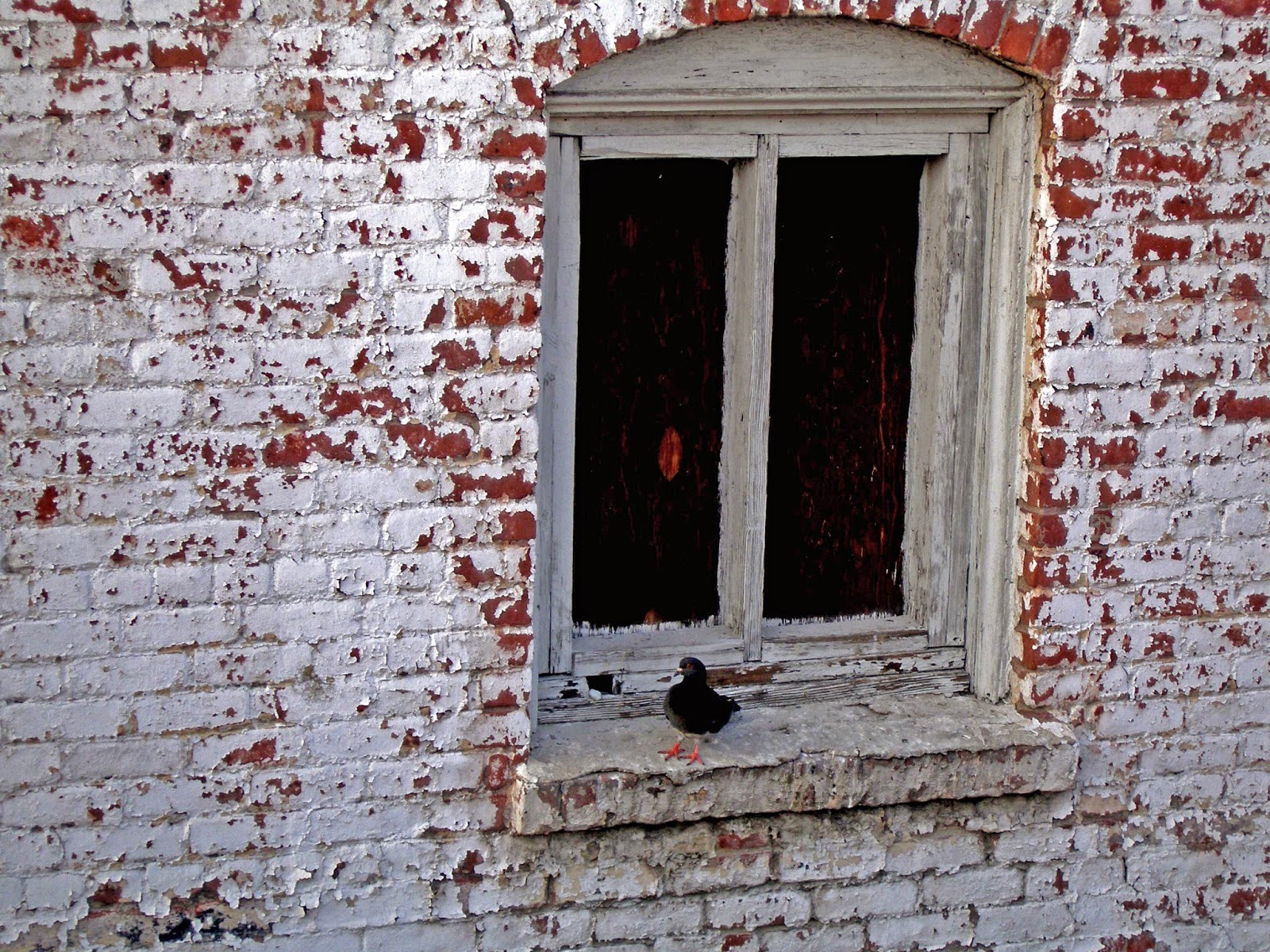 This shows just how close the Pickle Works Building is to the bridge during the reconstruction period at the beginning of 2008. 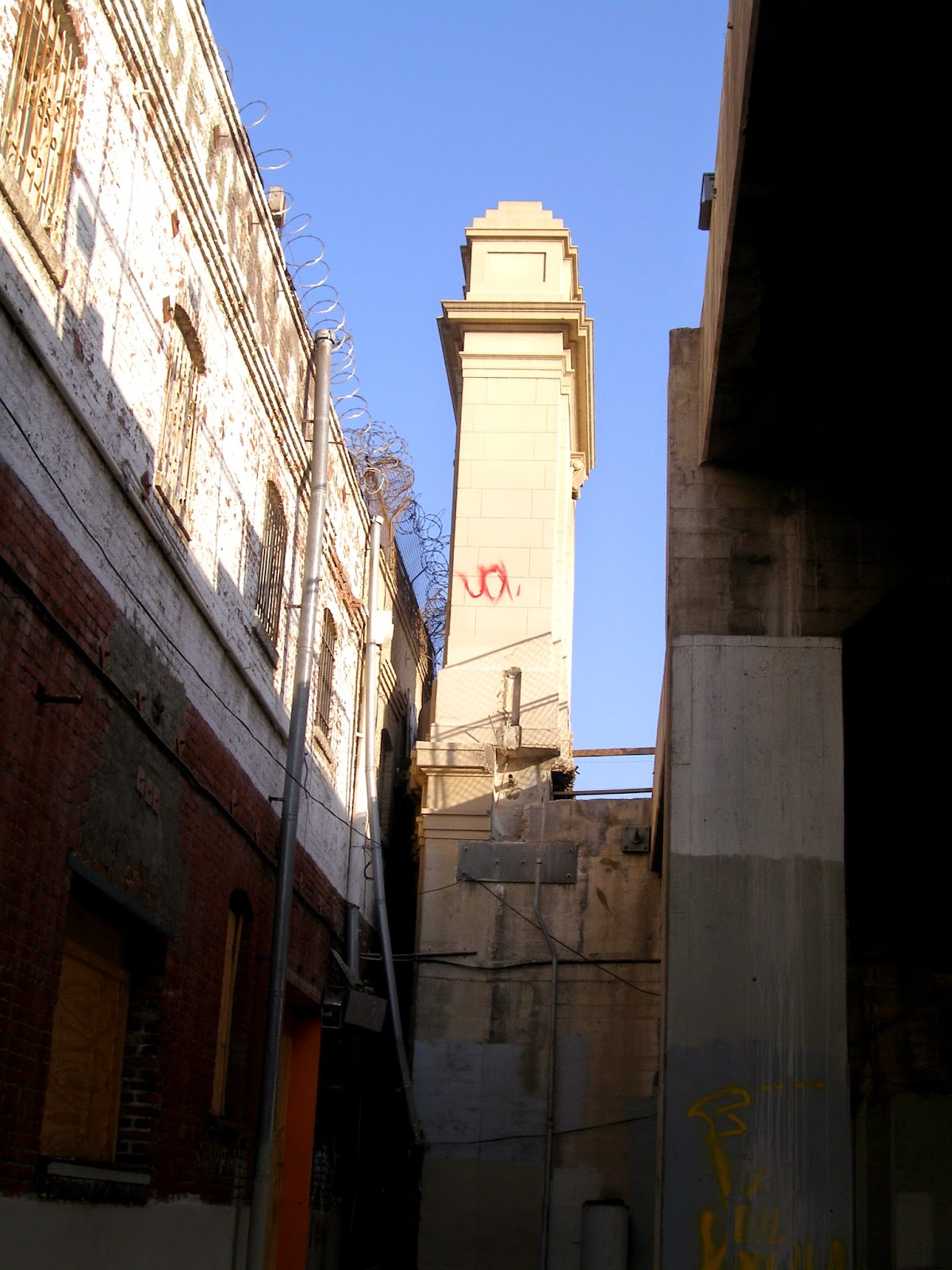 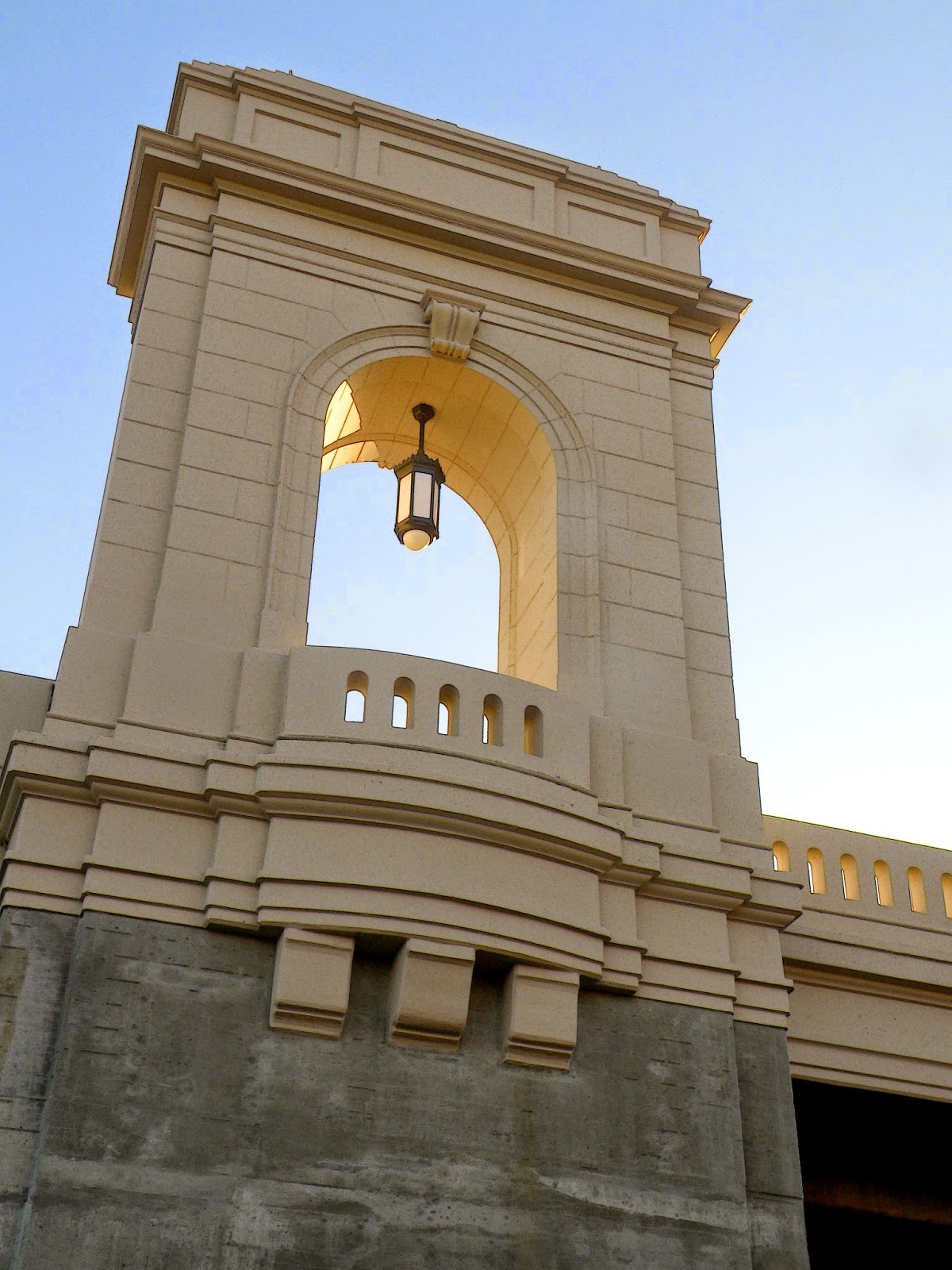 The bridge itself looked almost complete, but the pickle works building looked like this: 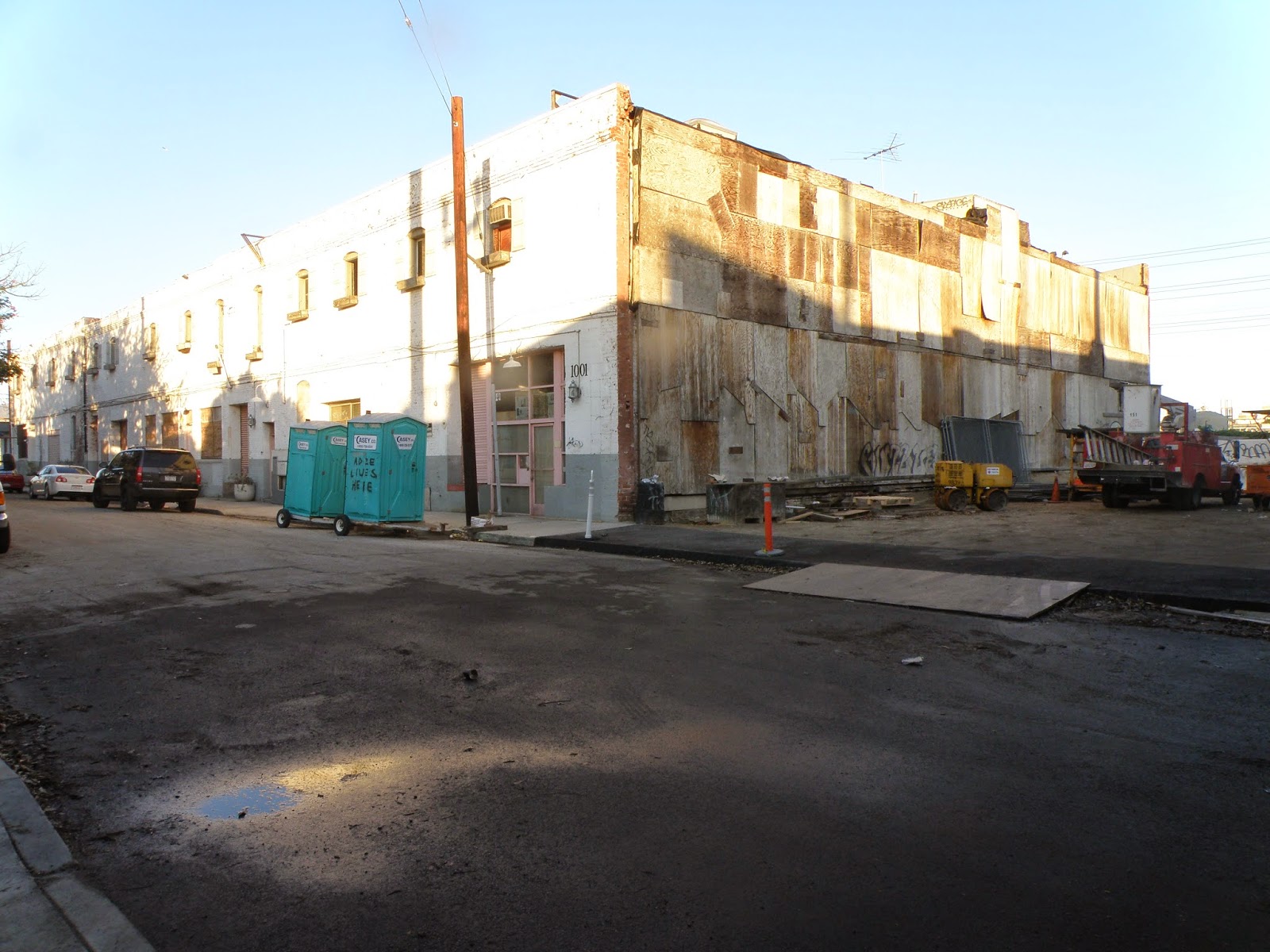 The end had been removed, but not restored.  Graffiti appeared. 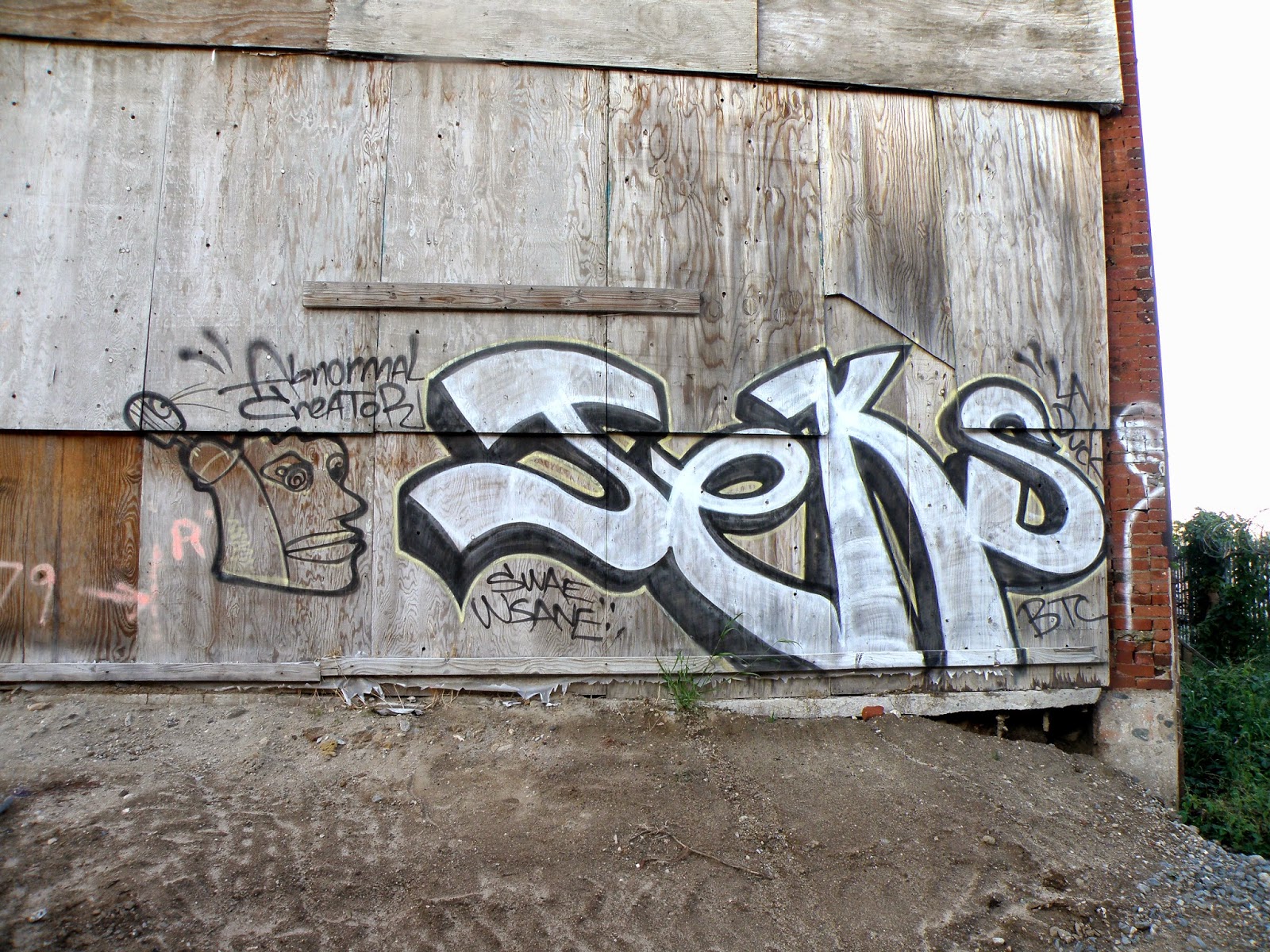 Some of the residents names were still by the buzzer at the door. 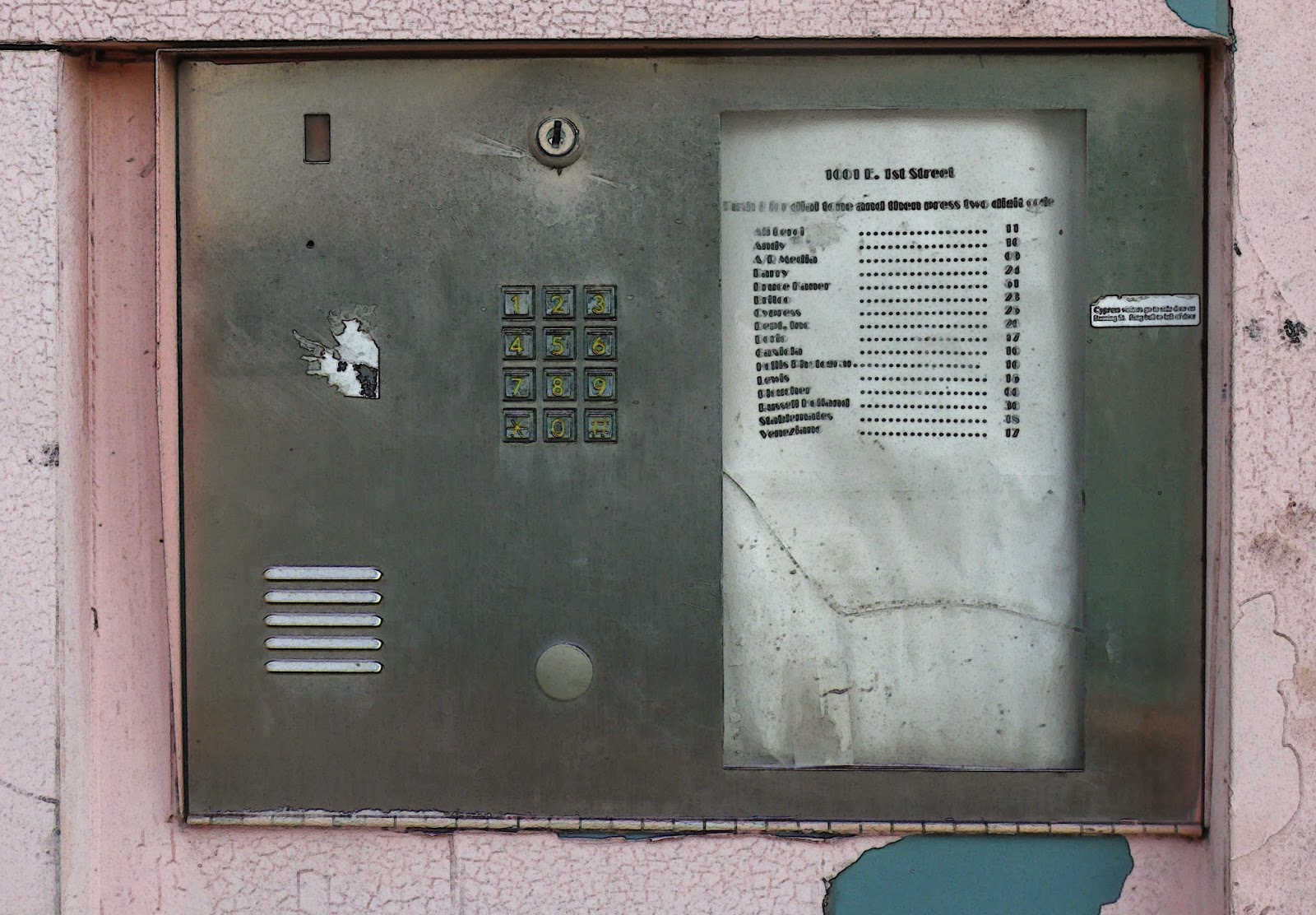 and a potted plant left behind still put forth a few leaves and flowers. 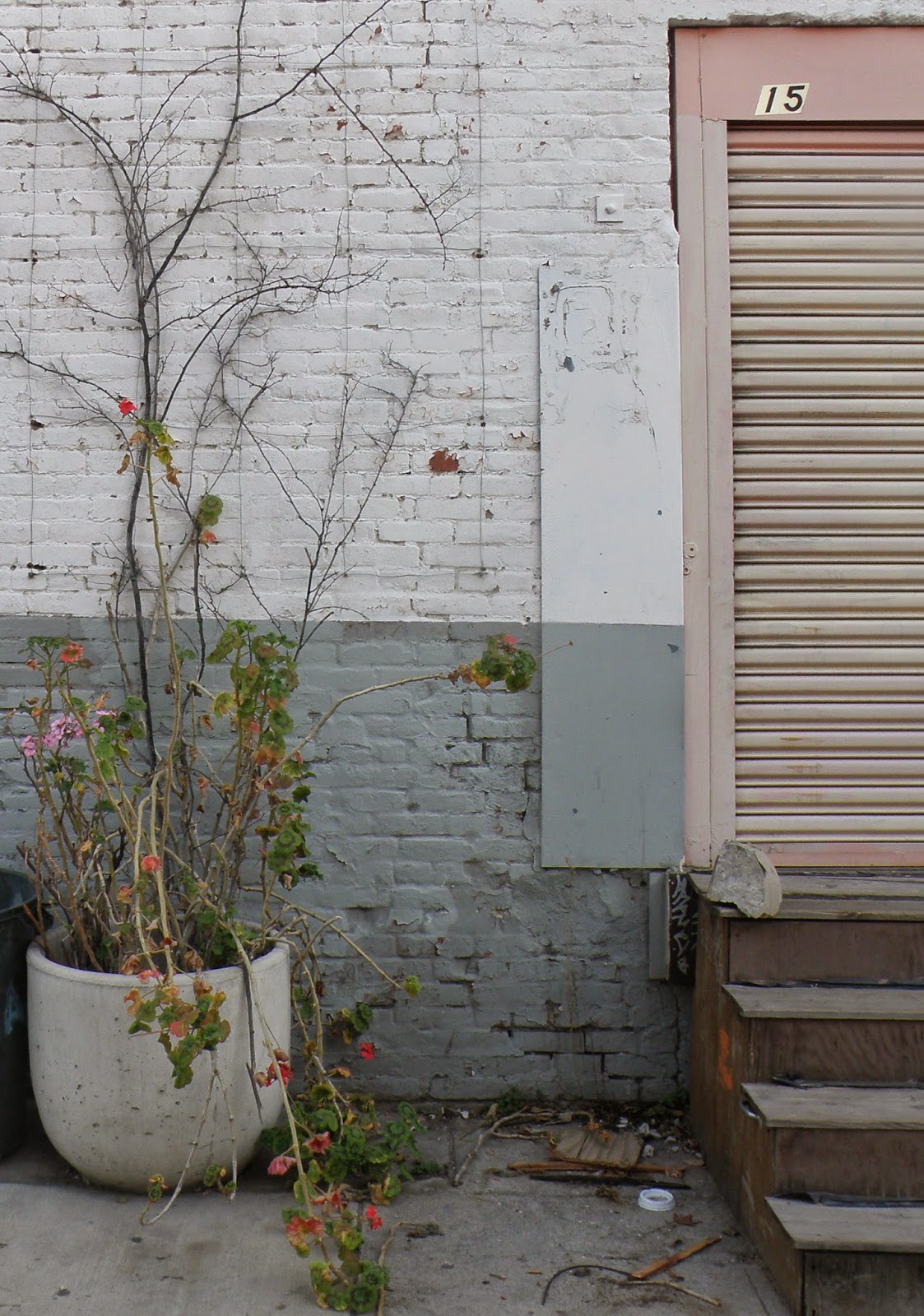 I found out later that the Los Angeles Department of Engineering wanted to tear it down.  Carlton Davis wrote "The pickle has been lopped but still stands" in August 2011.   In April 2013 there was an exhibit:  “In Your Face” which opened at the Angel City Brewery in conjunction with the District Gallery on April 11th, the majority of the show is the devoted to the Art Dock, the world’s first drive-by art gallery, located in the downtown arts district. The community organizations  L.A. Conservancy, and Los Angeles River Artists and Business Association (LARABA) worked to save the building.

I haven't seen any new information since then.  All I can say is that it's still there, under the shade of my favorite trees. 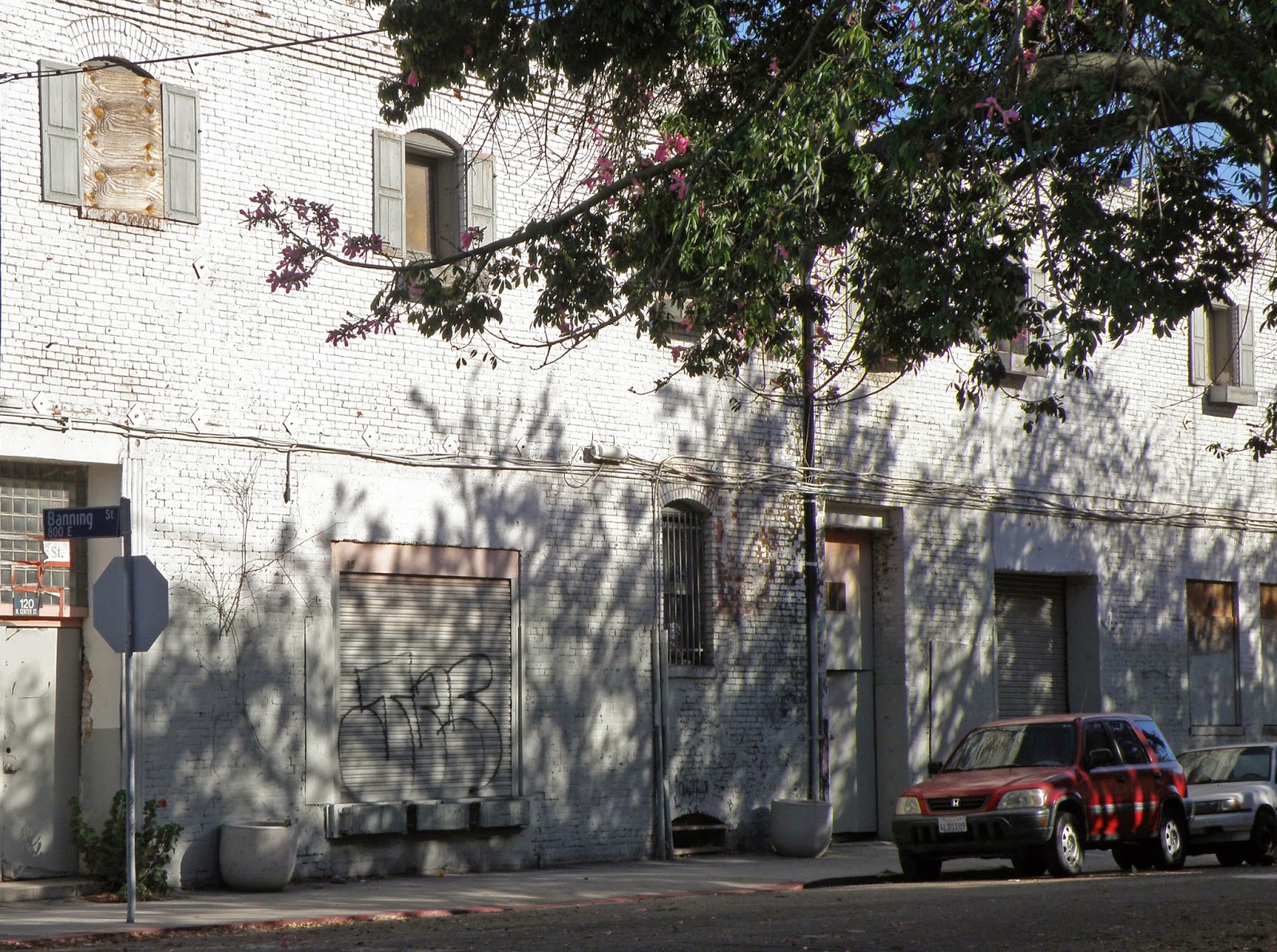 Posted by evansescent-city at 8:10 PM